skip to main | skip to sidebar

Completed Games (Click to view all of the game's related posts)

I really don't know what to say as I write this. My 360 has betrayed me. Look at what it did to my beloved Fallout 3 GOTY disc! 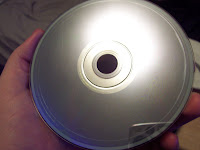 Earlier today, my foot caught the memory card hanging over the ledge of the entertainment center as I was moving, which caused the console to make a terrifying clattering noise as it was jolted around, but I immediately took the disk out and inspected it for problems and there weren't any scratches like this. I continued to play, but about 3 AM this morning the dreaded "Disc Read Error" message popped up. I pulled it out, fearing the worst, and absolutely wanted to murder myself when I saw those ring-shaped death-scratches.

I don't think my xbox is still under warranty, and I don't know what to do. I don't know how to fix the disc, I don't know how to fix the system, I don't have the money to get a new one, and I don't trust this thing anymore to put any more of my game discs into it to test it out. So that means no BioShock, no Assassin's Creed, not even any Mass Effect, which I haven't had a chance to play yet. I'm now limited to my downloaded games, which leaves Fable as the only "full retail game" I can play on it.

That's some shit luck there my friend... you have my condolences.