skip to main | skip to sidebar

Completed Games (Click to view all of the game's related posts)

You know, Zeromus is not that hard when your weakest party member is level 92.

Allow me to set the scene for you:

The first time I faced Zeromus, I was on a plane for a 4 hour flight between Atlanta and Los Angeles. I didn't beat him then. I spent the next few days recuperating and relaxing (hence the gap between the last posts) before I finally decided to finish up the game. I spent a good 2 hours just leveling up in the crystal pre-core area before Zemus's lair. Once Cecil hit level 99, I headed out of the cave and finished up some sidequests. Once I had the Safe Travel augment, I knew it was time to finish up.

I started off by berzerking Edge, having Rydia start casting with her Stardust Rod, and having Kain jump before I had Cecil use the crystal. This gave me a good 25,000 damage right off the bat. I continued to jump with Kain, attack with Cecil, and Edge, and cast Stardust with Rydia. when I didn't need her to heal, I had Rosa cast Holy. I was consistenly dealing 9999 damage with everyone, but Zeromus wasn't going to go down that easily. He took out Cecil with a combination of Whirl and Flare, and everyone else went down after a combo of Big Bang and Meteor. Only Kain was left alive, BARELY. 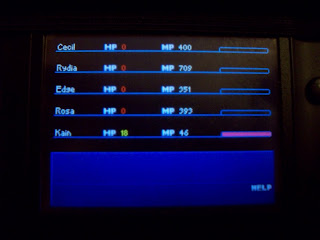 I was sure it was over; I knew I'd have to try again. I had Kain jump again and waited as the battle ran its course. With nobody for Zeromus to attack, we both just sat there and waited for Kain to come down...

Take that, forces of darkness!


I'll post a full review of FF4 tomorrow, including a short retrospective of my experiences with it.
at 12:53 AM